I have been using Omegle for 4 months. It is a platform that serves to communicate with people from all over the world and it is precisely what I like the most about this website. There I meet very different people. Many times, I even come across some followers, we take photos, we make videos together and thus I get to know them a little more. And if you don’t like what they tell you, you can simply pass it on and skip the person easily and quickly. Note that it can also happen to you, if that other person does not like you or does not like you, he can just skip you, “says Charo Ordóñez, 17, known as @ charo.ordonez on TikTok, where he has more than 148,000 followers.

“I started using it, like many, in my quarantine. Before I didn’t know what it was, and I think we’re still not very aware of what it really is. I started using it because of the videos I saw on TikTok,” says Juana Laskowski, from 16 years.

As Juana explains, this page that was born in 2009 began to become popular among adolescents, pre-adolescents and even children, during the quarantine. It is that many popular TikTok users record themselves while talking with users from other countries and upload it to the Chinese platform. The majority of Argentine adolescents are recorded trying to “enlighten” North Americans about the American continent and about Argentina. They amuse themselves hearing that for Americans America is their country and not a continent; or they laugh a lot when they say that Argentina is in Asia, or they even don’t know it as a country 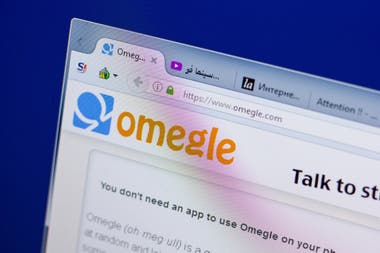 “From social isolation, many adolescents turned to this site looking for excitement, encounters, fun and contact with others. Everything they found in the outings to bars, parties or clubs, they imagined finding it there. Seduction, exchange, fantasy and sexuality were they put into play on Omegle “, explains María Zysman, psychopedagogue and founder of the NGO Free of Bullying.

Luis Gratch, a psychoanalyst doctor, agrees with Zysman and adds that adolescence is a stage in which one begins to interact with boys of the other sex. “The places where you can meet people of the other sex and where you can overcome the phobia that occurs from anonymity, such as Omegle, are very tempting,” he says.

At the same time, the psychoanalyst emphasizes that at this moment in his life boys are looking for exciting experiences. “They listen to music at high volume, the colors must be colorful, the perfumes very intense. They need intensity in everything that is sensory and that is precisely how applications such as Tik Tok and Omegle are, which allow them to relate in that way. On the other hand On the other hand, due to social isolation, the computer is the only means that today allows social contact, “he says.

Another feature that is very attractive to teens is that Omegle is anonymous. When entering, it is not necessary to register or assign a name. “If when starting to talk to a person they get bored or upset about something, the user simply switches to another. Anonymity, availability every day at all hours, and the disinhibition generated by being behind a screen; tempts teenagers to cheer up a little more, to play and expose themselves, to test their own reach. In times of loneliness, confinement, boredom and uncertainty, it is not strange that they have entered this application “, adds Zysman. “This anonymity encourages people to overcome social phobias that involve meeting people,” adds Gratch.